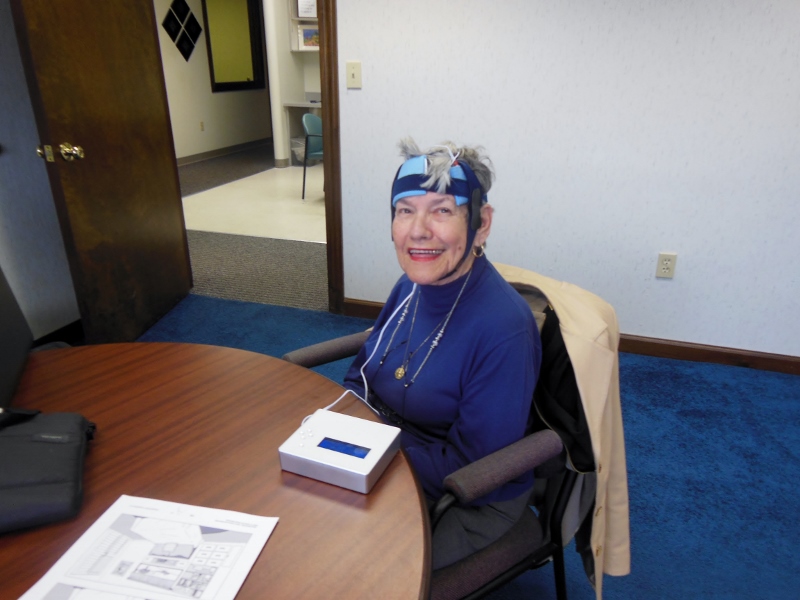 A client wearing the device

This client is a 75 year-old woman who has been coming to the Center every year for six weeks since 2009. Her devastating stroke occurred in 2008, and her brain scans showed that her left hemisphere was almost entirely dark (this means a lot of brain tissue had died). The doctors predicted that she would not live. When she began a program in 2009, her total aphasia test score was only 19/100. She could only say a few stereotypical phrases, such as "well, sh**", "something wonderful", "sometimes I walk", and "sometimes water". She did not recognize that she said these things, but she had a great sense of humor and was persistent and motivated.

On her sixth journey here, she began with a total aphasia test score of 36.5/100 (Severe Broca's aphasia). She'd had a medical issue which lead to slight regression of her aphasia scores. She used some spontaneous speech, but a lot of the same words/phrases (e.g., "I don't care", "wonderful", "poopie-do", and "well, sh**"). She recognized that she was doing it about 30% of the time but she had a hard time trying to get out something else that she wanted to say. This was very frustrating for her. She had begun to write the first few letters of some words. Due to her apraxia, she was still largely reliant upon someone else to give her the first sound to start the word. Her sentence length was around one word "water" or she used of her phrases. Her speech was best when someone gave her the leading sentences ("A cup of _______________"). Her speech needed help from someone else and her understanding needed key words to be written out for her. She could read some single words. 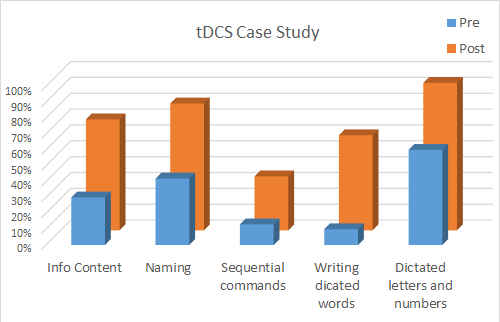 She met criteria to begin transcranial direct current stimulation (tDCS). She was a great candidate to study the effects of this treatment since she had chronic, more severe aphasia. Since we've known her for so long, we were well-aware of what she's done or not done during treatment. We used this treatment daily (14 sessions) for the last three of her six weeks in the program. Stimulation ranged from the standard 20 minutes to 5 minutes. Due to fatigue on the second day, her treatment times were reduced to 5 minutes for three sessions, then increased in increments of 5 min for the next 3 sessions to return to 20 minutes. There is a brief video of some of the tasks we worked on for the first three days at the bottom of this post.

Day 1: Noticed immediately that she could read sentences aloud faster and more accurately. Went over three sentence cards. She immediately put them in the correct order, read them by herself card by card with 90% acc. Read aloud words from her set with 90% acc. Nine spontaneous words the rest of the day. Wrote the word "daughter" perfectly when asked.

Day 2: Noticed that she could read words aloud better and faster. Read aloud 14 new words we had never practiced with some apraxic errors. Words consisted of nouns, verbs, adjectives, and a few two-word phrases. These were words you wouldn't see all the time, such as "orchestra", "Slinky", "cloudy", and "fish swimming". Complained later of being very fatigued and eye strain.

Day 3: Named 11 pictured items independently and quickly. Words that she couldn't say, she wrote out , which helped her then say the word. Named ten items quickly in the room. 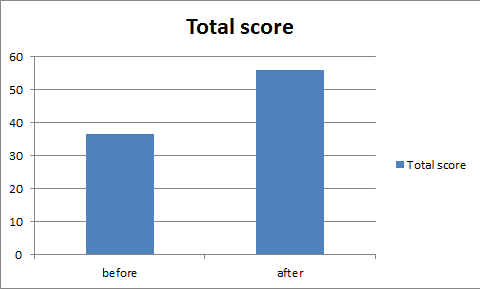 Overall, she has greatly increased her naming of objects as well as how quickly she names them. She can use writing to not only label objects, but also to cue herself to say the name. She can write in short sentences, write her name and address, realize when she's saying something incorrectly, and give herself concentration time to fix it. Writing to name things is a great skill not only to communicate what she wants or needs, but also to help her speak. Her spouse reports an increase in spontaneous phrases "What did you do?", "What for?", "close the blinds", "lock it", etc. She now looks away to concentrate of what she wants to say, so that she can usually say the word she wants.

Her before and after test scores show an incredible 19.4 point improvement. For those of you who aren't familiar with aphasia testing, this is a big leap. Clients typically make great progress in intensive therapy, but it's often difficult to capture on a standardized test.

Her family is thrilled with her gains! Watch portions of her first three sessions below!

Subscribe for articles and updates
What is intensive aphasia therapy?
I'm ready for a plan
Talk to us or message us (727) 823-2529 or message us