How far is too far to get help for aphasia?

How far would you travel to get help for a loved one with aphasia?

For Apurva, 8,300 miles was not too far. Her husband Bille and she literally flew halfway across the globe to receive intensive aphasia therapy at The Aphasia Center in St. Petersburg, Florida. And she's not the first to look outside of her native country seeking help for family members who have aphasia.

Bille survived a stroke in late August 2014 while skipping rope in his native country of Tanzania, Africa. Health and fitness has always been important to Bille, an avid soccer player. Although he suffered a lot of brain-swelling, he was fortunate to not have collapsed, gone unconscious, or have required surgery. 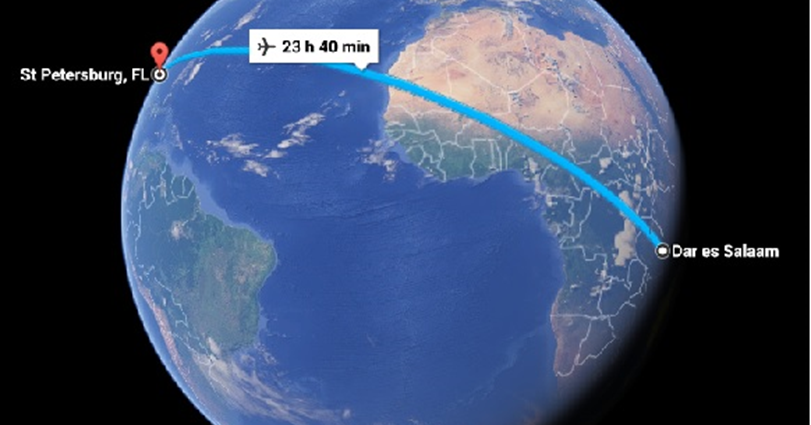 The distance is so great it takes almost a full 24 hours in flight.

Unfortunately, one of the lingering results of Bille's stroke was a condition called aphasia, as well as a few physical deficits. Caused by brain damage, aphasia affects the ability to not only understand and express communication verbally, but goes beyond the verbal to affect written language as well. For Bille, more specifically, he was dealing with Broca's aphasia; which is most commonly associated with verbal apraxia, relatively good auditory comprehension, agrammatic speech, and poor repetition. What this looked like in Bille was an inability to say anything other than "afah" over and over. He could write a few words but there were spelling errors and the words weren't really helpful. Bille did use gestures to help, but having a conversation, even for Apurva, was very difficult.

Bille and Apurva sought his initial rehab in neighboring Kenya, at the Aga Khan Hospital in Nairobi. There he received both physical and speech therapy for a time, eventually transferring back home to Dar es Salaam, Tanzania to work with a German physical therapist. However at home he was only able to receive speech therapy for 2-3 hours a week. 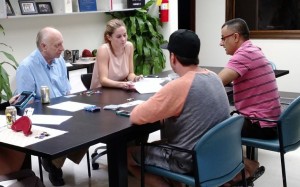 Bille teaches the rules to his favorite card game, poker, during group session.

"Aphasia has been hard and frustrating for Bille, a well-respected businessman, landlord and corporate property manager", writes Apurva. Bille was in control of the entire business. Both his 82 year-old father, and 12 year-old son were hit very hard by this". Apurva has also had to pick up much of the slack, working to take over most of the business in which she had no knowledge. "It's like not knowing how to swim and being thrown into the deep end", Apurva confesses. "But Bille has been helpful, aware, and with good memory which has helped us only come out stronger."

Bille works out several days a week with OT, Carolyn

After much research, Apurva found and contacted The Aphasia Center for help. The two decided to pick up and travel to St. Petersburg, Florida for 6 weeks of intensive aphasia therapy. As a part of Bille's personal Aphasia Action Plan™, he received 5 hours a day of one-on-one speech therapy and "amazing occupational therapy. Both of which we never had!" she says. Apurva says their goals coming into the program were to get the tools to know where to start. Now she says Bille's at the point where he can practice his speech therapy through videos and other tools provided by The Aphasia Center.

Before his stroke, Apurva described Bille as "very vibrant, confident, social, witty and larger than life. He is still strong, and tries to keep a strong exterior, but can look lost in crowds. It's just not the same." How does Bille seem now after 6 weeks of therapy? "Bille is walking better, definitely has more confidence and he understands that only working on it will make him better." 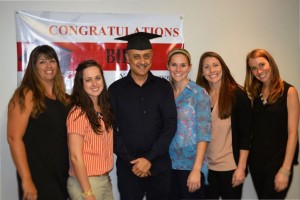 Bille, Dr. Bartels and the rest of the Aphasia Center team at Bille's graduation.

"I've been trying to find a place like The Aphasia Center. I just wish we had found out about this place earlier. I don't think any facility in the world would be nearly as good for aphasia. Before coming here, he couldn't say any words at all" Apurva says. "My advice is to research and read more about aphasia so you know what you're dealing with. Try your best to give them support and strength, while still pushing them to be independent. I would highly recommend this program to anyone suffering from aphasia. Thanks to Dr. Lori (Bartels) and her amazing team!"

Alone in your aphasia? You're not the only one!